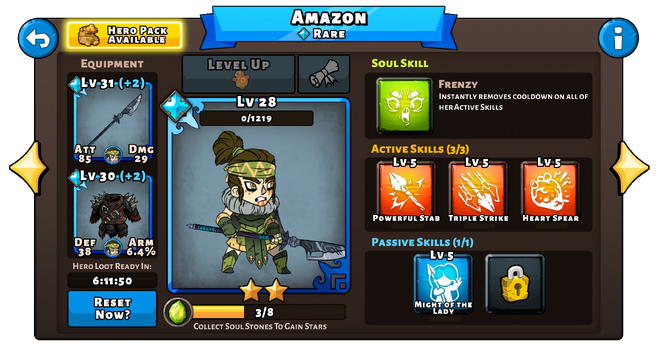 The Amazon is a rare hero of the warrior class. She wields two-handed stabbing weapons and wears leather armor.

Warrior: A deadly denizen of the forest, can strike multiple times or protect allies

Amazon has a strong early-game presence which fades away to insignificance later on.

At the earliest levels (20s and 30s) Amazon is quite effective in PvE content. She is best when either using all 3 of her attacks, or 2 of her attacks (Powerful Stab is the least favorable one) and Cover Allies to reduce damage received. Shield of the Lady is not the best choice, since there are better tanks than Amazon, but it's not necessarily bad. As for passives, players usually equip Amazon with Might of the Lady for extra attack and Wilderness Maiden for extra resistances. Wilderness Toughness (a simple health increase) doesn't compare to the other two buffs and is thus rarely equipped.

Her soul skill, Frenzy, is where things get interesting. Obviously, Frenzy's first and foremost purpose is to duplicate attacks done by Amazon to increase damage output. It's best to use Frenzy right after Triple Strike to get the attacks to stack as much as possible (by doing this, Amazon can expect to get seven or eight hits in a row!). The second purpose of Frenzy is a more niche one: to reduce the cooldowns of soul skills. If you have a filled soul energy bar but all your soul skills are on cooldown, Frenzy will throw in some more active skills to throttle the cooldowns lower. This can be a lifesaver if an enemy is about to use a strong attack or a stunning attack that you need to prevent.

In the earliest levels, Amazon becomes a powerhouse when she wields Angelic Impaler, which adds a hefty amount of extra light damage (and light resistance is a rather uncommon one for most monsters in the campaign levels). As players reach the 40s, she can use Frost Spike to great effect by getting even higher damage numbers; often times the damage is significant enough that Frenzy will earn back more soul energy than the cost to use it. Vest of the Flayer is a fine choice to increase critical damage, and Great Wyrm Hide works for added defense.

Sadly, this is just about the peak of her strength, and as players move on to the 50s and especially 55, she has no real place in the game anymore. A huge drawback of Amazon's offensive abilities is that she can only attack the frontline, and the frontline will always be inhabited by tanks with strong plate armor like Strength of Legend and The Fortress. The tier 2 weapon for Amazon, Spear of Pain, does nothing to help her against enemies with The Fortress because of the immunity to crits; thus, most tanks completely neuter Spear of Pain. Nevertheless, there are a few tiny niches that Amazon can fit, and they revolve around her Cover Allies skill. Cover Allies reduces the damage allies take by a certain percentage, and the more Cover Allies active, the less damage received. So, the strategy is to use Frenzy right after Cover Allies to stack it multiple times and make enemies do almost no damage--or if 100% damage reduction is reached, literally no damage. Some applications of this include making stall towers and beating difficult week-long campaigns such as Yuletide Spirits. In this case Amazon enjoys more defense-based skills and gear--Shield of the Lady is a viable option for an active skill, and defensive gear pieces such as Rage of Raegon, Great Wyrm Hide, and Living Leather are preferred.

Retrieved from "https://towerkeepers.fandom.com/wiki/Amazon?oldid=5414"
Community content is available under CC-BY-SA unless otherwise noted.