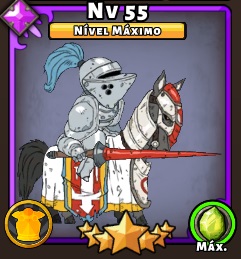 "I shall give you one last chance to surrender before I run you through."

Soul skill: Victory or Death: Increases attack with a penalty of reducing defense by high amount.

Dispatch Foe (short): Deals physical damage to an enemy, X% more if target is below 50% health.

King's Chosen: Increase armor by X% and damage by X.

At first glance, Cavalier might not seem like it's worth getting or using in a party because of the massive risk and low reward with the soul skill, but he gets better later on in the game, so if you plan on using him in the endgame, you might want to consider buying him from the shop.

Cavalier has strong physical attacks, and Master-at-Arms boosts the party (if they are also using physical damage attacks) as well as his. Amazon, Kensai, and Berserker are all great heroes that benefit the most from this passive, especially when they have good weapons. Recommended weapons for Cavalier include: Raven's Skewer, Deathcaller, Guisarme of Power, and Rage of Raegon.

Just note, if your hero uses a physical damage attacking skill but the bonus damage is a separate damage type, it will not get affected by the Master-At-Arms passive, which is why Angelic Impaler is not recommended.

Cavalier isn't really suited for PvP or tower defense builds, mostly due to his soul skill because the team is more susceptible to taking damage.

The soul skill is not recommended at lower star ratings, as the defense penalty is a lot higher than the attack boost that you get from it. Once Cavalier reaches 4 stars is when this hero has a lot more versatility with his second passive, so don't ignore him for heroic missions early on if he is favored. Especially when he reaches 7 stars, his Soul Skill when paired with the Chivalry passive makes him a true powerhouse.

The best use with his soul skill is in a tower with stall floors or monsters with high amounts of defense, as those usually have longer skill cycles and, as such, allow you to stack Victory or Death and effectively brute force it. You can use an attack debuff hero, such as Necromancer or Samurai to drop the enemies' attack so the defense penalty from the soul skill won't hurt you as much. Cleric's Cleanse and Mystic's Disenchant skills remove the defense penalty as well, which allows for heaps of free damage if you use Victory or Death right before those skills. Beware: anyone using the Mass Dispell can erase the buff from Victory or Death, leaving only the debuff.

The taunt skill is normally neglected from builds because it doesn't gain any bonuses unlike Samurai's Warrior's Challenge, Knight's Threaten, or Templar's Challenge Evil, thus it usually causes more harm then good. However, it still has its niches in certain campaigns where redirecting the damage to Cavalier is actually beneficial, such as Item Quest 6, or in a chill turret spam tower on the first floor where he can take all the punishment. Hence, if you do want to use this skill, he can serve as a temporary 'punching bag', preferably as a wing taunt. With Warmaster's Call to Arms or Druid's Invigor skill, you can keep the Cavalier's taunt (and likely health) up indefinitely.

Retrieved from "https://towerkeepers.fandom.com/wiki/Cavalier?oldid=6516"
Community content is available under CC-BY-SA unless otherwise noted.