The Cleric is a common healer that you start out with in Tower Keepers. She uses one-handed hacking weapons and wears chain armor. 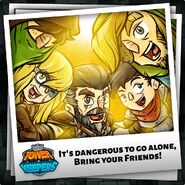