"Unholy warriors who are the first to charge into battle. High armor." 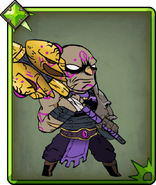 Add a photo to this gallery
Retrieved from "https://towerkeepers.fandom.com/wiki/Covenant_Guardian?oldid=511"
Community content is available under CC-BY-SA unless otherwise noted.