"Wherever you stand it's always looking at you..."

Demonic Watcher has high health, but a small amount of armor and mediocre fire, lightning, light and shadow resist. They are more vulnerable to physical damage and magic damage which it isn't resistant to. With low initiative, its Cone of Fire skill can deal heavy damage in a line.

It has two identical lightning attacks which it can deal damage from afar. It can poison a target dealing high resulting damage, Its maximum level is the highest of all non-boss monsters.

It has no stun resistance, making stunning hits (such as Cheap Shot or Vicious Blow) very strong against it, due to disabling its ability to attack. Backstab also deals increased damage to stunned enemies, making it very likely that a Thief will be able to backstab it while stunned (unless Backstab is used immediately before Cheap Shot).

And above all, the Demonic Watcher is currently the toughest monster to fall, even if its guard level is at its maximum. Very few people have it because of the immense difficulty of it dropping to the player, but that when they fall, it can be used in practically all the missions of heroes, including the last extreme stage of the Witch when its level is at maximum and its Fire attacks and thunder do high damage to enemy monsters. While in the Tower, only heroes with low fire resistance can be attacked, although they elevate and much the full power point of their tower, where it is advisable to at least have one on each floor, if possible. 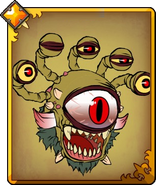 Add a photo to this gallery
Retrieved from "https://towerkeepers.fandom.com/wiki/Demonic_Watcher?oldid=6174"
Community content is available under CC-BY-SA unless otherwise noted.