Equipment are items in Tower Keeper that improve the stats of your heroes. They increase attack and defense, damage for weapons and armor percentage for armor. Many equipment also have special properties that boosts your hero in certain ways such as extra health, or even increased crit chance.

Equipment may be acquired through crafting crafting or being found. Crafting weapons and armor require you to learn the recipe before you are able to craft them. Your artisan levels determine the minimum level of an equipment piece, and if you are lucky it will craft over the minimum (up to at least 5 levels).

Common/uncommon equipment can also be acquired randomly as a reward from campaign levels, from chests or PvP. Rare equipment is available as milestone rewards in the Catacombs, Wizard Tower and Festival Events. Super Rare equipment can be randomly found in the gold event (2m gold spent) or dragon boss (stage X). Epics can never be found, except for the Vorpal Warsword for 35,000 gems in the gem event.

There are 5 tiers of rarity:

The rarity can be distinguished by the item's border color corresponding to the colors above. With few exceptions, higher rarity equipment is better than lower rarity. At higher tiers than rare, this difference becomes quite massive. Because of this, crafting any lower-tier items, including rare, will quickly prove a waste of precious resources.

Tier 1 epics are epic items that were available in the original release of the game. They become available to craft sometime between levels 37-45 (depends on the item), require 3-14 void cores to craft (typically 7-9 for weapons), and their max level is around 60-65 (depends on the item). Note that some crafting trees have more than one Tier 1 epic.

Tier 2 epics were added in an update in August 2017. They share the same golden border as a tier 1 epic; instead, they may be identified by their requirement of a minimum level 55 to craft. Tier 2 epics require as much as 28 void cores to craft (~19 for weapons), and all share a level maximum of 75. These are exclusively end-game content, standing head and shoulders above other items.

Certain equipment is uncraftable, being exclusively available through the guild shop for a hefty cost of 300,000 guild marks or randomly via events (gold festival event at 2 million gold spent or dragon stage X). These are all super rare tier equipment. They are:

These appear once every 2 weeks in the order above, and persist in the shop for a total of 4 weeks for a guild to purchase them. This means each item is introduced to the shop only once every 12 weeks (almost 3 months). 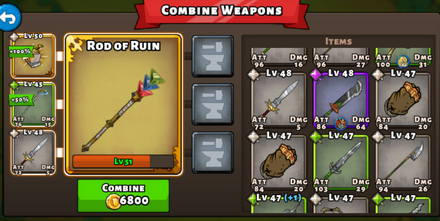 Combining is a method to level up equipment or monsters, increasing attack, defense, and dmg or armor stats (health+skill numbers for monsters). Combining functions by consuming items of equal or lesser level at the cost of gold. These consumed items are permanently destroyed. In exchange, the item gains experience and may level up.

Initially, only items in the same category are shown in the combine menu, providing a +50% bonus for being the same type, but after a few seconds other items will also appear.

Attempting to combine an item or monster that is above your keeper level will have greatly decreased gains.

Boosters are special items that Combine with a 100% bonus and zero gold cost. Importantly, they do not suffer as much from decreased gains for items above your keeper level, making them invaluable for maxing out epic items. They can be found in special campaigns, events, and the Guild Shop.

Equipment has a maximum level, although it varies by each item. The only consistent rule is tier 2 epics all have a max level of 75.

Enchanting equipment will increase the Attack and Defense stats of equipment (even if one of the stats was previously 0). Unlike combining, enchanting only requires gold. The gold cost for enchanting is determined by keeper level and the item's rarity. An item can be enchanted up to 11 times.

Take note! Once equipment is enchanted a single time, you lock it into that keeper level bracket. Every subsequent enchantment will be based on that cost and value, regardless of increases to your keeper level! You cannot undo an enchantment, so make sure your first enchantment is at a keeper level you're okay with for the item's future.

Retrieved from "https://towerkeepers.fandom.com/wiki/Equipment?oldid=6351"
Community content is available under CC-BY-SA unless otherwise noted.