Hero Battles is a PvP mode where two players pit their 4-man teams of heroes against each other. It is available beginning at keeper level X. A player must be in a guild and have under 500 guild marks in their inventory to participate in hero battles.

Hero Battles are the most rewarding form of PvP in terms of prestige and guild marks, assuming the player is victorious.

Tier 1 hero battles take place up until keeper level 29. In this mode, each player has 1 team of four heroes. Entry cost is 100 gold.

Tier 2 hero battles take place beginning with keeper level 30. In this mode, each player has 3 teams of four heroes, and they pair off until one player wins two matches, meaning the pairing between third teams may not even take place. Entry cost is 200 gold.

Wizard's Chosen is a hero battle against the computer. It is highly recommended for players who do not yet have strong heroes and the best weapons and armor enough to face a more competitive PVP, but their rewards when they win are greatly reduced.

But a curiosity here is, when you reach level 45, the level of difficulty against the bot becomes much harder to beat, because here, all heroes are using more advanced weapons and armor, making the strategic placement of heroes who have low HP and stamina, getting trickier by every level you climb, but their rewards are still extremely low, as artificial intelligence is not yet programmed to play like a real person with great strategies. 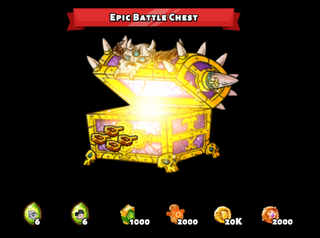 * may be split between two heroes (6 each), or between 3 heroes (4 each). Excess stones are automatically converted to gold.

Retrieved from "https://towerkeepers.fandom.com/wiki/Hero_Battles?oldid=5743"
Community content is available under CC-BY-SA unless otherwise noted.