Self-styled king of the bandits"

Korgan is obtainable for a limited amount of time by beating level 18 of Korgan's Revenge on extreme difficulty. As an obtainable unit he starts at level 25 once acquired. Beating level 20 on extreme earns another Korgan, but a level 80 one.

Like all boss monsters, if he is placed in the last floor of your tower, a unique mug shot of him will appear at the start and the end of the battle similar to battling him in the campaign. 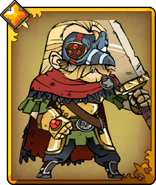 Add a photo to this gallery
Retrieved from "https://towerkeepers.fandom.com/wiki/Korgan,_Bandit_Lord?oldid=6030"
Community content is available under CC-BY-SA unless otherwise noted.