Start a Wiki
"A wand of virulent evil and pain, said to have 1000 suffering souls bound to it" 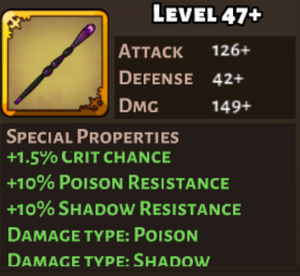 The Wand of Endless Suffering is the tier 1 epic wand. It is preceded by the super-rare Wand of Annihilation and succeeded by the tier 2 epic, Graymarrow Wand.

Along with the Rod of Ruin, the Wand of Endless Suffering is the only weapon in the game with a double damage-type bonus. This causes its DMG stat to be doubled in effect, making this wand among the strongest offensive weapons in the game.

The double damage contribution is so significant, that the Warlock's shorter cooldowns, which allow her to more frequently apply the double damage type bonus, make her preferable to the Archmage for most of the game, in spite of the Archmage's skills having higher base attack.

The Wand of Endless Suffering requires level 45 to craft, overall the second highest of any T1 epic item after the String of the Gods.

Retrieved from "https://towerkeepers.fandom.com/wiki/Wand_of_Endless_Suffering?oldid=3324"
Community content is available under CC-BY-SA unless otherwise noted.