Wand of Swiftness is a super-rare staff weapon. It is non-craftable, and exclusively obtainable through the Guild Shop or boss portal, for 300,000 marks or randomly via events (gold festival event at 2 million gold spent or dragon stage X). 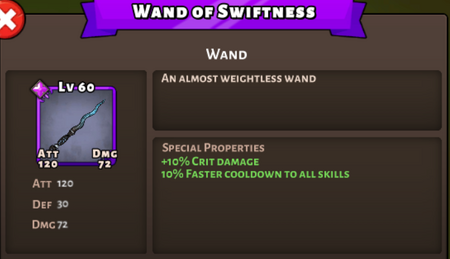 Wand of Swiftness is one of two wands that offer cooldown reduction (the other being the ultra-powerful Graymarrow Wand). This wand, however, has a 10% reduction against Graymarrow's 5%. As such, it is perfect for a hero who specializes in utility and doesn't have much of a need for offense or other stats. This is why it's widely regarded as the best wand in the game for the Witch, and well worth the 300,000 guild mark investment to obtain one of these for her. She will ABSOLUTELY need the Wand of Swiftness when Zaluss comes around.

It's not particularly useful for the other wand-wielders, as the Warlock depends on damage and the Sorceress should do the same with her Lightning Stroke and Firestorm. Therefore, they should focus on working towards Graymarrow Wands.

Retrieved from "https://towerkeepers.fandom.com/wiki/Wand_of_Swiftness?oldid=6603"
Community content is available under CC-BY-SA unless otherwise noted.